These are the notes and reflections from my week at the University of Mary Washington where I was an instructor at the Digital Pedagogy Summer Institute. I taught the “Action” track, which aimed to tackle questions around making change inside and outside education institutions and with and against digital technologies.

To ask what role “education” might play in critical/digital engagement.

Many of the topics for this track involve exploring various digital technologies, but the track assumes that participants have zero background or previous experience working with them. Indeed, one of the areas this class will repeatedly explore is how our ability to “take action” or even “see action” might change depending on our familiarity, expertise, and/or reluctance to use certain tools. The point of introducing and playing with these various technologies is not mastery; rather it’s to think critically about what actions they afford and what they constrain – in the classroom and beyond.

“What Will Start Taking Shape By Friday” Project:

Participants should plan begin work on a project that would extend academic work beyond the research journal and/or beyond the classroom. Participants will present their works-in-progress to their cohort for feedback.

(Course materials and readings are all in the GitHub repository. Feel free to fork.)

This was a wonderful talk on how Tressie McMillan Cottom as a first year, tenure-track professor was able to create a Digital Sociology degree at her school, VCU. Institutional change is possible. It’s possible to make change rapidly and, even under the regime of the corporatized higher ed, to make change happen with a social justice bent.

@tressiemcphd #digped develop space for critical learning while giving my students the benefits of an institution? pic.twitter.com/g5rwSGt66M

(I was asked to introduce Tressie. Here’s what I said.) 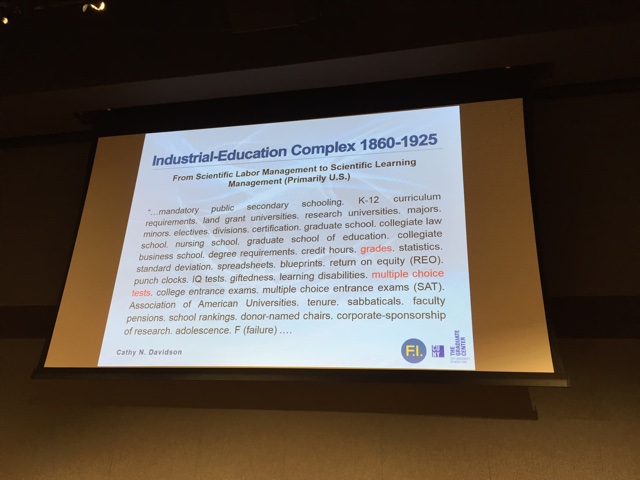 @CathyNDavidson on 🔥🔥🔥. Take heed, tech folks. This is true of tech design as well. #digped pic.twitter.com/1UmzGzpCsJ

This is @CathyNDavidson's mic drop to her #digped keynote. We need to help our students "aim high"! pic.twitter.com/Mcw0xh3uRy

My “intention” for Wednesday


(Sean and Jesse asked me to set the intention for Wednesday. Here’s what I said during breakfast:)

Who asks me to get us started on Hump Day?! I mean, I was the person who led the track that had both our keynote speakers spiraling downward into depression, right?

Cathy Davidson said a couple of things in her talk yesterday that I want to underscore for us and expand upon as we go into Day 3. And that’s something about pessimism, optimism, and will.

She alluded to Antonio Gramsci, one of the greatest Marxist thinkers of the 20th century, best known for writing some 3000 pages of history during his imprisonment by the Fascist Italian government from 1927 until his death ten years later at age 46. Gramsci famously said “I am a pessimist because of intelligence but an optimist because of will.”

Cathy said yesterday that “you cannot counter structural inequality with good will.” But will, according to Gramsci, is part of a revolutionary praxis. It recognizes the social structure, and it helps us to move deliberately from thinking about to acting for radical change. Will is, for Gramsci, political and intellectual. Will is a strategy, or part of a strategy of struggle.

You all came to the Digital Pedagogy Lab Summer Institute because, I’d wager, of will. Good will. Willpower. A will to change your own pedagogical practices. A will to change your institutions. Will is necessary, politically. This week, together, we link that will to action, to collective action. You are not alone.

Another passage from Gramsci (who I put alongside Paolo Freire, Franz Fanon, bell hooks), from a 1917 letter “Indifferenti”:


Indifference is the dead weight of history. Indifference plays an important role in history. It plays a passive role, but it does play a role. It is fatality; it is something that cannot be counted on; it is something that disrupts programmes, overturns the best made plans; it is that awful something that chokes intelligence. What happens, the evil that touches everyone, happens because the majority relinquish their will to it, allowing the enactment of laws that only a revolution can revoke, letting men rise to power who, later, only a mutiny can remove.


… I am “partigiano”, alive, and already I hear, in the consciences of those on my same side, the throbbing bustle of the city of the future that we are building. And in it, the social chain does not weigh on the shoulders of only a few …. There is no-one watching from the sidelines while others are sacrificed, bled dry. I am alive, partisan. And, therefore, I hate those who do not take sides; I hate the indifferent.

.@mburtis’s vision for Domain of One’s Own (and why i say it’s the most important ed-tech we have) #digped pic.twitter.com/KbHu8PZnCb

When people get nervous about domain of one's own breaking, @mburtis says "good, it broke" & hopes it will be gloriously messy. YES! #digped 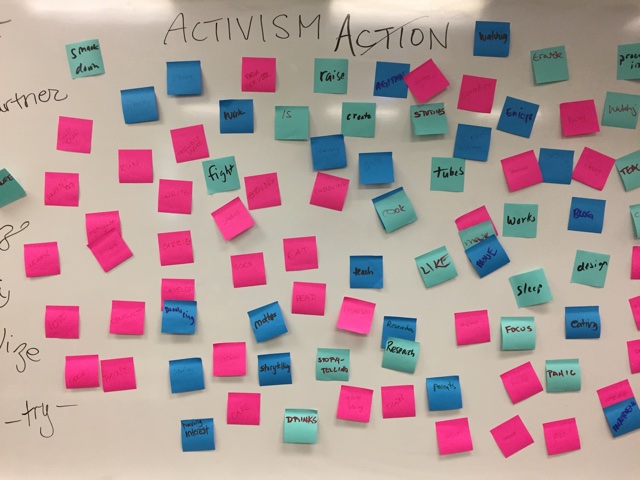 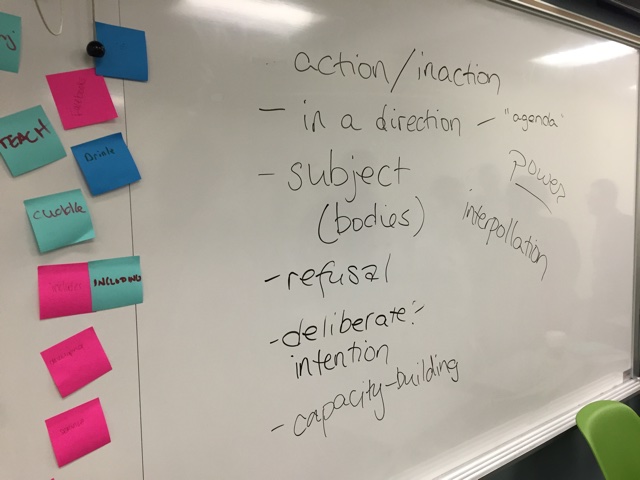 Your Tech: What Do You Use? What happens to your data? 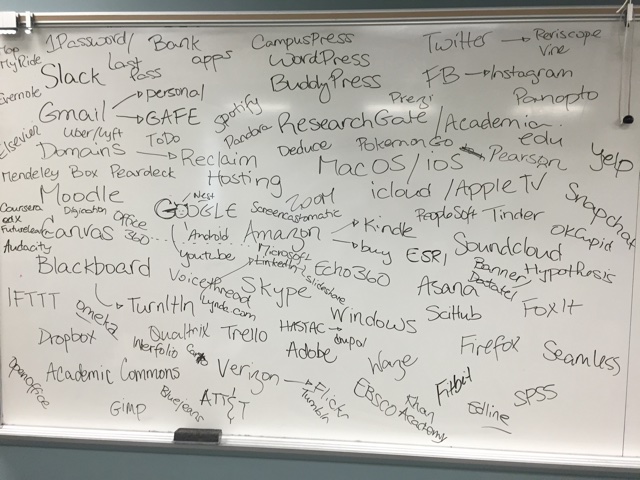 What are the ethics of compelling students to use these sorts of (extractive, exploitative) technologies? How can we resist?

How do we support one another online and offline? What steps can we take to mitigate violence (emotional and physical) as we (and students) work in public online? How can we demand better support from our institutions?

The how and why of open data and open publishing.

Web 101, GitHub 101, and thanks to Reclaim Hosting, a domain for everyone at Dig Ped.

(More resources are in the course’s GitHub repo.)


Inspired by Mark Sample’s notion of a protest bot, we spent much of Thursday working on building bots, with particular thanks to Zach Whalen who shared a Google Spreadsheet for doing so.

Some of the bots participants in the "action" track created: @theLword (more from Jana Remy on how and why she built this bot that responds when people use the word “lame” on Twitter), @No_More_RIP (which tweets the names of those who’ve been killed by police), and @blackedtech (which tweets about ed-tech diversity and Franz Fanon).


I am so grateful to have spent the week with this group. It was emotionally and intellectually exhausting, no doubt, to work through the various issues of education and activism, but I hope that it was rewarding. There is both privilege and risk in “showing up,” particularly at a PD event like this.

Much love to the staff at UMW’s DTLT who helped the Digital Pedagogy event organizers pull this off. Much love to those who attended via Virtually Connecting, particularly Maha Bali and Kate Bowles (it means so much to see your faces and hear your voices). And much love to Paul Prinsloo for traveling all the way from Jo’burg to participate in person.