Like so many children, Isaiah was — for a time, at least — obsessed with dinosaurs. Although just barely beyond toddler-hood, he possessed a seemingly encyclopedic knowledge of the creatures, with an incredible vocabulary of words like pachycephalosaurus, deinocheirus, and archaeopteryx. We lived in Wyoming when he was small, and with his great enthusiasm he even once convinced the paleontologist Bob Bakker to let him into his lab and have a quick go with a dremmel on a locally-uncovered triceratops bone.

Triceratops are fairly cool, as far as armored herbivores go, but Isaiah eschewed the vegetarianism of his parents as part of a general philosophical outlook on life. His favorite dinosaur was the much more violently bloodthirsty deinonychus. We would debate where the accent should go when pronouncing it: dy-NON-ikus or DY-NO-NY-kus. But his favorite toy was a Tyrannosaurus Rex figurine, which he carried around with him as much as possible. He'd thrust it out with a shake and a roar — a behavior much more befitting a preschooler than a debate over the proper pronunciation of dinosaur species.

He'd often pretend to be a T Rex too, his little arms clenched up by his sides, two fingers sticking out to mimic the giant lizard's forearms and claws. (He wanted to be a dinosaur for Halloween when he was two and was not pleased that people thought he was Puff the Magic Dragon, not the Tyrant Lizard King.) 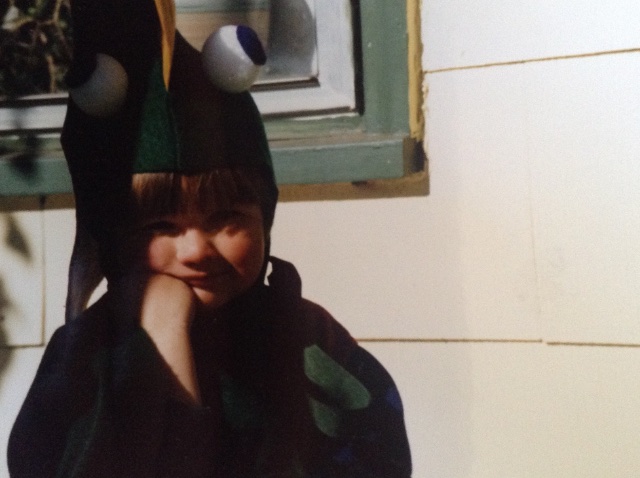 Shortly before Isaiah turned three, we moved from Wyoming to Oregon. For his birthday that year, we drove to the coast with plans to camp out and spend the day playing on the beach. We neglected to make camping reservations, however, and the campgrounds were all full by the time we arrived. It was dark, and so we decided to just pull off on a little wayside and sleep in our van (a VW). We'd carted all of Isaiah's gifts with us, and he woke early and opened them. I don't remember what his dad and I got him, but his granny bought him a sleeping bag: a Jurassic Park sleeping bag. (The movie came out that summer.)

When we could finally lure him out of the sleeping bag and out of the van, we realized that the rocks at the bottom of the hill below us were covered in harbor seals, some lounging, some swimming in the cold, frothy waves. It was too dark to have noticed them the night before, but their appearance that morning seemed magical. We walked down the hill and stood as close as we could to watch them — not too close, because of the tide, of course. I told Isaiah about selkies — how they shape-shifted from human to seal, how they would lure sailors to them with their big, beautiful eyes, how your heart longed to join them in the dark, deep waters.

About a decade later, Isaiah and I returned to that very spot — Strawberry Hill — to scatter his father's ashes. And in early July, Kin and I revisited those rocks once again, to scatter Isaiah's in turn. There were no seals, no selkies there that day, thankfully, as surely I'd have thrown myself in with them, hoping they'd carry me away.

As I struggle to come to terms with Isaiah's addiction as well as his death, I can't help but think of him as a small child. It's not just that those memories feel easier and safer, although yes, there are no needles, no nodding out, no unreturned phone calls or texts when I think of him as that sharp, little boy. That image of Isaiah is not one dulled by drugs or crushed by trauma — his or mine. He was so full of life and love and curiosity — that was and always will be his spirit: my precious, little tyrant lizard king.

Dinosaurs and addicts are both, of course, wildly misunderstood: what the latest science tells us versus what we (think we) know from older, outdated science and via popular culture. Maybe they're not so mighty; maybe they're not so broken after all.

On a whim (and probably upon reading upon the brilliant colors some theorize dinosaurs might have been), Isaiah had painted his T Rex figurine in brilliant turquoise blue and lavender. I'm not sure what happened to it. It was so precious and beloved, and then he grew up, and other toys and pleasures, of course, mattered more. But I recently searched online for one — or something similar at least — and bought myself another little T Rex toy. This one remains dark grey, the patterns of its skin serious and "scientific," not passionately fantastical. Nonetheless it now sits on the shelf over my shoulder, where it can peer down on me, mouth open in a forever silent but most ferocious roar. 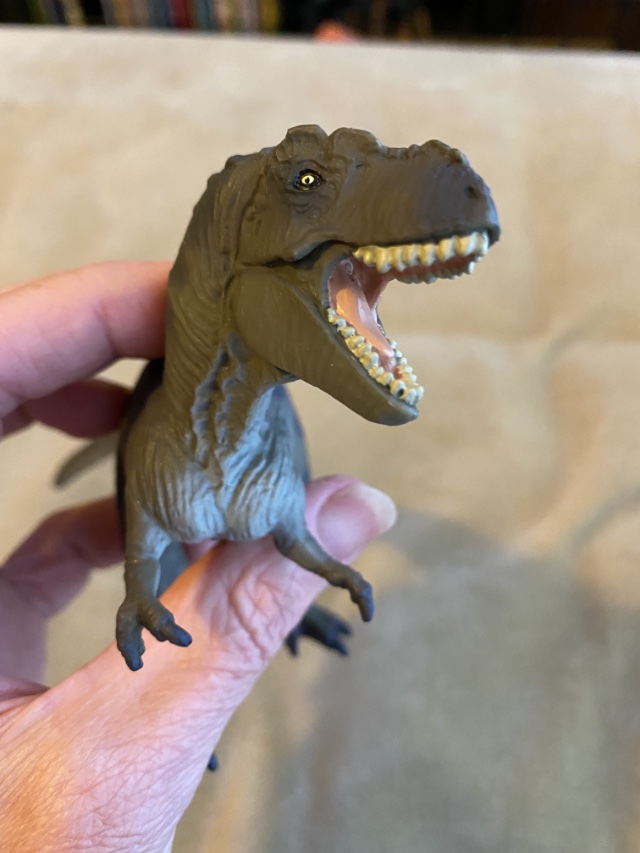